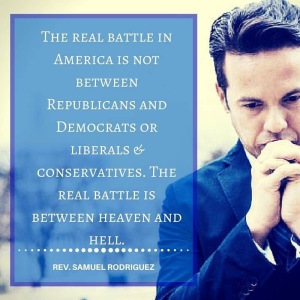 From a Christian perspective, we must not lose sight of the real battle. Our battle is not against flesh and blood but against Satan and his demons. Just because you don’t see them waging war does not mean that it is not happening all around you. In the spiritual realm is where the real war wages.

So what about politics? Should we still care about who wins the White House? Sure we should. We are Americans and we care about our country. The person in that seat decides a lot of things for us. But that is not where the war is won. It’s much greater than that. This is an epic battle of supernatural forces. So pay attention and be ready to do your part but don’t lose perspective.

A few things to consider as the election looms:

1) Voting for the moral platform is our duty as Christians.

Go out and cast your vote. Make an informed decision. But being aware of the real war means voting for the candidate that upholds the morality of God’s word. What their stance is concerning issues like abortion, same sex marriage, and separation of church and state are issues that have eternal repercussions. Don’t let any other agenda guide you more strongly as a believer. Don’t let their stand on taxes or immigration or unions be the deciding vote for you as a believer.

2) Voting for the true Christian candidate.

If you haven’t figured it out by now, pretty much every candidate claims Christianity in some form. Their words and actions show  their faith often to be a ruse. As a believer you should be looking for the following from a candidate in order to know them by their fruits:

3) Don’t see the winner as either savior or devil.

So many speak about the election as if the very fabric of Creation hangs on the ballot box’s thread. God is bigger than the election. His church will not fail. There is no reason to fear. Do I think there is a lot at stake with the election? I definitely do but my hope is not in a politician or a government. It never will be placed in them because they are not worthy of my faith. My faith is in Christ and He will never abandon us.

4) Be informed before you speak about candidates.

So many Christians are making statements publicly about candidates without having all the facts. Be informed on what candidates stand for and what they believe. Take time to research it and speak informatively. Let’s be a witness for Christ by speaking hope and peace into a tumultuous environment. Encourage other believers not to fear but to trust.

5) Should I vote for the lesser of two evils

Let’s first recognize that unless we are voting for Jesus we are always voting for the lesser of two evils as no candidate will be without sin. When Christians face two morally corrupt individuals, they should not justify a vote for either. In a case like this we would be better off voting for a write in candidate who did uphold Christian principles. They won’t win you say? Most likely true but you didn’t compromise either. I cannot vote for evil. It just flies in the face of a holy God. For those who would come back at me that we at least get some good things with one candidate versus another, I would say put your trust in God and not in a morally bankrupt person you are hoping follows through on their political promise to do moral good. If Christians would ever unite and be work together we could shape every election in our country!

You have to make the decision to vote your conscience. I cannot do that for you. We just need to know that we are accountable for our actions. I am for mine and you are for yours.

Don’t lose perspective. The battle is beyond flesh and blood and we are squarely in it. I have read the last pages of scripture and the victory is ours in Christ Jesus. Praise Him.
Dax